Since 1978 Sue has been involved in the sport of rowing at many different levels. From competing to coaching, to representing Victoria several times at the Elite level. Sue also represented Australia at the World Rowing Championships, winning medals at both the Commonwealth Games and Olympic Games.

Sue’s experience and qualifications include:

Romanian born oarsman Ion Popa married Sue Chapman – Popa and they have 2 children, Ted and Rosie. Having represented Romania as a Junior and Senior athlete during the communism era, Ion then defected to Mannheim, West Germany in 1978 at a regatta. Upon gaining citizenship of Australia, Ion went onto represent Victoria from 1981 and Australia from 1983.

Ion competed at the World Rowing Championships, Commonwealth Games and Olympic Games (twice) winning medals at all of these events, including Gold at the 1986 World Championships in the seven seat of the Championship Men’s Eight – the first Australian crew to do so in this blue ribbon event at the international level.

Ion’s experience and qualifications include:

Rowing School Victoria is proud to have been to initial point of contact to rowing for the 2013, 2014 and 2015 World Champion Gavin Bellis and the 2015 Under 17 National Single Sculling Champion. 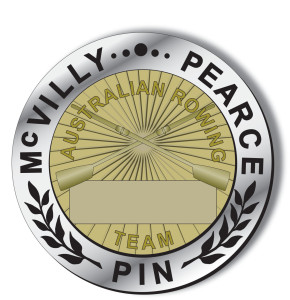 On Friday 23 October 2015, Rowing Australia launched the McVilly-Pearce pin, named after Cecil McVilly, the first rower to represent Australia at an Olympic Games and Bobby Pearce, the first Australian rower to win an Olympic gold medal.

Every rower who has represented Australia at Senior level at either a World Rowing Championships, Commonwealth Games, Olympic or Paralympic Games will receive a specially numbered pin to commemorate the first time they were selected to be part of an elite group of men and women who have represented Australia on a world stage.

The McVilly-Pearce pin is an embodiment of the great traditions and values of those who have represented and continue to represent Australia on the water. Every athlete has been delegated a number from the first time they were selected and raced for the Senior Australian Rowing Team.

The McVilly-Pearce Pin is a two-piece pin, 18mm in diameter and made of bronze and copper with an Antique Patina centre piece.

Each pin has an individual number and is presented in an individual case to those rowers who have represented Australia dating back to 1912 through to the present day.